The Governor’s executive order shutting down “non-essential” businesses and organizations has been in place since March 24. The Governor’s orders are not laws passed by the legislature and do not comply with Massachusetts's existing laws regarding the powers of the Governor during a pandemic. Under the current four phased re-opening plan, many Massachusetts businesses and organization would have to wait over 100 days, at the earliest, to re-open. While there is much debate on the merits of the Governor’s actions, his authority to take any action, especially actions as drastic as these, should always have a clear and firm legal basis.

The Fiscal Alliance Foundation (the Foundation) supports the lawsuit filed by the New Civil Liberties Alliance (NCLA). NCLA is a nonpartisan, nonprofit civil rights group founded by prominent legal scholar Philip Hamburger to protect constitutional freedoms from violations by the Administrative State. NCLA’s public-interest litigation and other pro bono advocacy strive to tame the unlawful power of state and federal agencies and to foster a new civil liberties movement that will help restore Americans’ fundamental rights. Michael P. DeGrandis is a Pittsfield native and Senior Litigation Counsel at NCLA. Michael is the lead counsel in the lawsuit and is joined by Danielle Huntley Webb of Huntley PC, who is acting as the local counsel. Danielle is also the Chairman of the board for the Foundation. 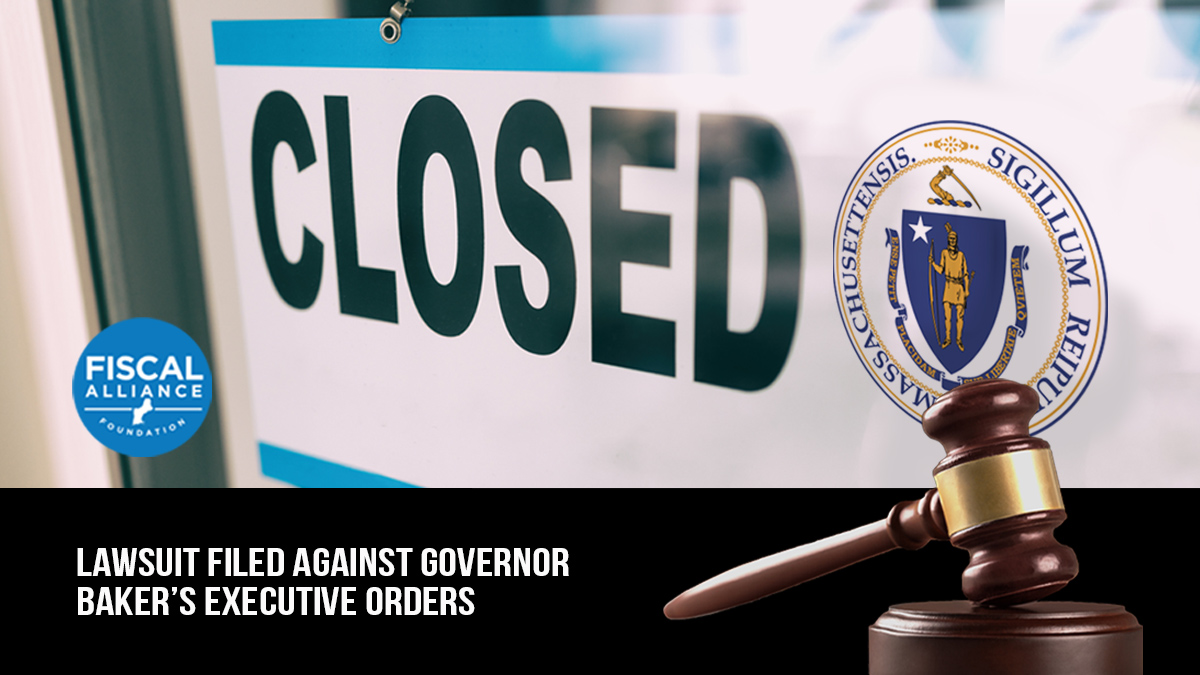 The ten plaintiffs being represented by NCLA are listed below:

Dawn Desrosiers is the owner of Hair 4 You, a small hair salon located in Hubbardston, Massachusetts.

Susan and Nazareth Kupelian are the owners of Naz Kupelian Salon, a small hair salon located in Lexington, Massachusetts

Carla Agrippino-Gomes is the owner of Terramia Ristorante & Antico Forno, small restaurants located in the North End of Boston, Massachusetts.

Ben Haskell is the Headmaster of Trinity Christian Academy, located in Hyannis, Massachusetts.

The lawsuit has been filed in Worcester Superior Court. While the Foundation is not a plaintiff, it will be taking an active role in the public discourse regarding the lawsuit and its merits, with special focus on the many small business plaintiffs that have been decimated by Governor's executive orders.

The Fiscal Alliance Foundation is a non-partisan, non-profit organization whose mission is to promote individual liberty and a more fiscally responsible, transparent government for a better New England through education and legal assistance.

“Like so many others, the plaintiffs were more than willing to initially follow the direction of our national and state leaders. They were asked to not go to work and put their lives on hold so that Massachusetts could flatten the curve and prevent the virus from overwhelming our emergency healthcare facilities. That was successfully done, but the Governor’s executive orders are still in place. These are not laws passed by an elected legislative body nor are they compliant with the existing law granting the Governor emergency authority to deal with this type of pandemic. The executive orders are harming countless businesses while infringing on the civil rights of almost everyone in the Commonwealth. The Governor’s executive orders completely sidestep the rule of law in the Commonwealth,” stated Paul Diego Craney, a spokesman for the Fiscal Alliance Foundation.

“While there is much debate on the merits of the Governor’s policies, what should never be in question is if the Governor is overstepping his authority when imposing these executive orders. Any type of long-term change to society must be done through the legislative action, not through endless executive orders. That is something we hope the court of public opinion and a court of law would agree with us on,” stated Craney.

“By applying the Civil Defense Act instead of the Public Health Act, the constitutional damage is done, and Massachusetts now has a government of men, not laws. Fear of a deadly virus is not a reason to abandon constitutional governance. Governor Baker doesn’t have the power to make law by royal decree—lawmaking is the legislature’s exclusive responsibility. Bay Staters can best protect each other’s lives and livelihoods through locality-specific solutions passed by their legislators—the elected officials most familiar with the needs of the communities they serve,” concluded DeGrandis.