The Fiscal Alliance Foundation announced today the results of a new, statewide poll of Massachusetts business owners on issues related to the COVID-19 pandemic and the Massachusetts reopening process.

The poll, conducted with live operators and fielded on May 25-26, 2021, surveyed 374 registered voters in business-owning/operating households statewide. The margin of error is +/- 4.9% with a 95% confidence level and was sponsored by the Fiscal Alliance Foundation and conducted by Jim Eltringham of Advantage Inc, a polling company in the DC area. This is the first statewide poll conducted of business owners, and what they think should be done to help get the state’s economy growing again. 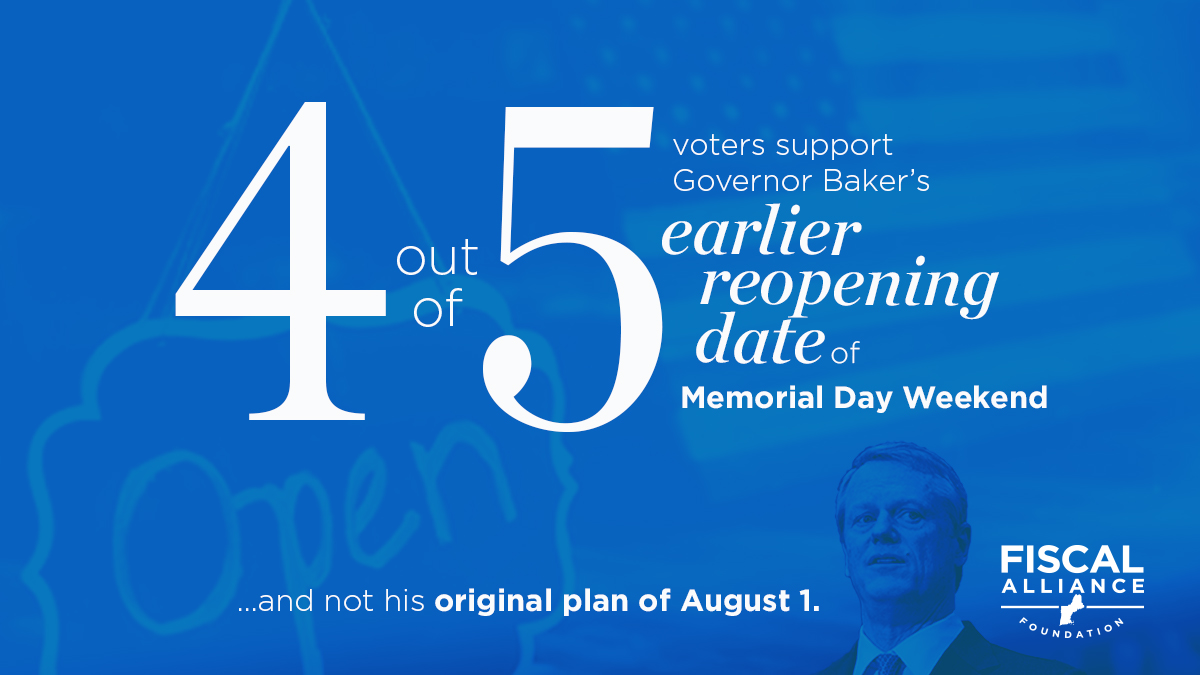 Governor Charlie Baker had originally called for Massachusetts to be re-opened by August 1. After neighboring states began accelerating their re-opening, updates from the Center for Disease Control, and intense political pressure, Governor Baker set an earlier re-opening date to Memorial Day weekend. According to the poll, that pressure to get Governor Baker to re-open earlier is widely approved of by the business community. The poll found overwhelming support for Governor Charlie Baker’s move to fully reopen the state in time for the Memorial Day weekend holiday, with four out of five business owners supporting the move from the original August 1 reopening target. Businesses related to manufacturing, health care, real estate/construction, and retail are the biggest pro-reopening sectors, while banking and finance are the least eager.

“The poll confirms what many of us know intuitively—those most effected by the shutdown are the most eager to get back into the normal swing of things and avoid the loss of a second early summer season,” noted Paul D. Craney, a spokesman for the Fiscal Alliance Foundation.

The poll also questioned business owners on their views as to how to best spend the federal pandemic relief funding Massachusetts is due to receive.  A plurality of business owners agreed those funds would best be used to provide tax relief. The second most popular choice was a tie between using the relief funds for “Get Back to Work” bonuses to get people off of unemployment, and using them to replenish the unemployment trust fund. The unemployment trust fund has been the recent focus of pro-business organizations as the Baker administration recently announced dramatic and unanticipated fee increases to this fund. Even if your business did not lay off worker during the pandemic, all Massachusetts businesses are being asked to pay this fee over the next 20 years. The fee would even be applied to businesses over that time period which haven’t even been created yet.

“The fact that an obscure fee paid to the unemployment trust fund is tied as the second highest priority when polled shows you that businesses owners are really nervous about this issue. Lawmakers and the Governor should understand that businesses really want this issue addressed and want federal pandemic funds to be used to pay off this unfair debt they have to pay because of the shutdown orders issued by the Governor,” noted Craney.

The final question of the poll asked business owners on their feelings in the 2022 gubernatorial election. Heading into the election, there is clearly major concern about the business environment; roughly 75% are “much” or “somewhat” more likely to support a small-business candidate and jobs and taxes are the top issues by a considerable margin.

“If Governor Charlie Baker does not run for a third term, it would be wise for the next Governor and the candidates running in 2022 to know that what unites the business community is their desire to see the next Governor embrace a pro-business agenda,” concluded Craney.

A full copy of the poll toplines can be found here.

A full copy of the crosstabs can be found here.