Petition Filed with the US Supreme Court on Gov. Baker’s Use of Executive Orders

On Monday, May 10 the New Civil Liberties Alliance (NCLA) filed a petition for a writ of certiorari with the Supreme Court of the United States (SCOTUS) regarding the December 10 decision by the Massachusetts Supreme Judicial Court (SJC) to uphold Governor Charlie Baker’s pandemic orders based on the 1950s Cold War-era Civil Defense Act (CDA).

The Fiscal Alliance Foundation supports the NCLA’s next move to seek justice through a potential SCOTUS trial.

The CDA is a Cold War-era statute designed to protect Massachusetts from Cold War-era threats and the Public Health Act was passed to protect its residents from pandemics and other health related emergencies. The CDA was designed for foreign invasions, armed insurrections, and destruction associated with fires, floods, earthquakes, and similar cataclysms. Until Governor Baker’s March 10, 2020 state of emergency, the CDA has never before been invoked in a health emergency. However, the Public Health Act explicitly empowers health authorities to suppress and prevent transmission of infectious diseases. Under the Public Health Act, disease control lies with the local boards of health, not with one man, the Governor, located at Beacon Hill. 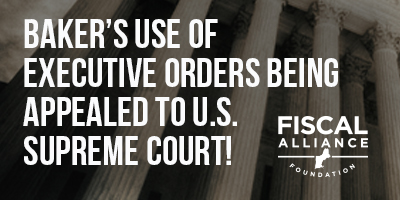 The ten plaintiffs include mom-and-pop businesses, two heads of religious organizations, the head of a private school, and others. The constitutional rights to due process of law and to be governed only by laws passed by the legislature have been denied by the SJC, causing harm to every resident.

NCLA’s SCOTUS petition argues that the SJC never explained why the executive orders were consistent with the Massachusetts Constitution or why they are the swiftest, most desired outcome during a second pandemic wave. The SJC didn’t properly employ established tools of statutory interpretation, finding instead that the CDA covers COVID-19 because of its severity, rather than the nature of the threat. Relying heavily upon superseded SCOTUS precedent to justify its rejection of the plaintiffs’ First and Fourteenth Amendment claims, the decision is fundamentally flawed and ripe for review by the SCOTUS.

“With today’s petition to the Supreme Court of the United States, we are hopeful that the country’s highest court will examine what is taking place in Massachusetts and restore liberties and rights that have been devalued during the pandemic. Today’s actions should not be misinterpreted as a judgement to the policies that were ordered during the last year a half. Like many of us, some of those policies we agree with, others we do not. Rather, we are supporting the petition in hopes that future orders by the Governor, whomever that may be, are based on strong legal grounds and not fears or the politics of the day,” stated Danielle Webb, Esq, local counsel and Chair of Fiscal Alliance Foundation.”

A copy of the petition is available here.

A copy of the NCLA's full statement is available here.